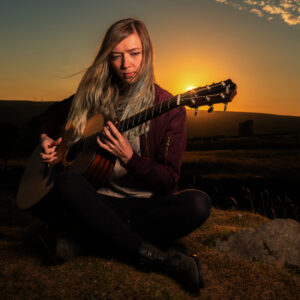 Becky Langan plays at The Medicine Tap at 12.45pm and The Flying Horse at 4.45pm on Saturday 5th June.

Born in Rochdale, Becky Langan is a percussive fingerstyle guitarist who employs a combination of extended techniques that explore the outermost reaches of the acoustic guitar.

Becky was a semi-finalist on Guitar Star 2016 (Series 2) which aired on Sky Arts - a TV show which scours the UK to discover a world class guitarist. Throughout this competition, she recorded at Abbey Road Studios with producer Tony Visconti and received mentor sessions from many iconic musicians, including; Tony Iommi, George Benson, Wilko Johnson, Jon Gomm and Preston Reed.

Becky has since grown an appreciative audience from all over the world, and to this day, has over three million views on one video alone.