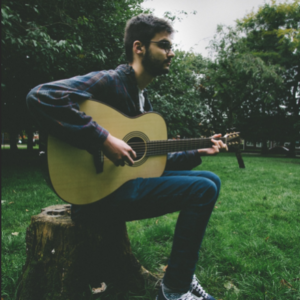 Phoebe & Cori play as a duo at The Flying Horse on Friday 4th June at 6.30pm.

Louis Campbell is a west-country raised guitarist based in Manchester. He is currently in his third year at the Royal Northern College of Music and has been lucky enough to study with Martin Simpson, Stuart McCallum and Craig Ogden. He plays in the Sam Sweeney Band as well as the BBC Young Folk Award nominated duo Owen Spafford and Louis Campbell. He also releases solo singer-songwriter music under his own name. “An exciting young guitar player” - Mark Radcliffe, BBC Radio 2.

Phoebe Harty is a cellist from Lancashire brought up playing traditional English and Scottish music alongside classical cello. She is a long standing member of the National Youth Folk Ensemble and as part of 'Don't Feed the Peacocks' was a finalist at the 2018 BBC Radio 2 Young Folk Awards. Her wide range of influences and teachers across the world have lead to a flexible, intuitive and empathetic style and a heartfelt approach to playing folk music.

Cori Smith is a violist from West Yorkshire, currently studying composition at the Royal Northern College of music. Classically trained, she was introduced to folk music through being a member of the National Youth Folk Ensemble and BBC Young Folk Musician of the year 2020 finalist's Don't Feed the Peacocks. Cori loves how alive, spontaneous and groovy the tradition can be.