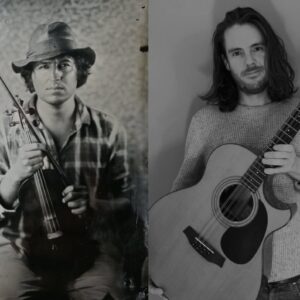 They also play at The Flying Horse at 3pm and The Medicine Tap at 5.45pm on Saturday the 5th June.

Please make a note in the comments section when booking to say you are booking to see the music. Please note, a view of the stage cannot be guaranteed.

Mikey Kenney is a fiddle player and balladeer from Liverpool, whose playing is steeped in both English and Irish traditional music. A well travelled musician and a member of the Band of Burns, he has also worked with the likes of Vinicio Capossela (Italy), Dan Haywood's New Hawks, Victor Herrero (Spain) & Josephine Foster (USA). He is an accomplished recording artist and producer, with his last two solo albums 'the Reverie Road' and 'the Counsel of Owls' both being rated 5/5 by fRoots magazine. He is currently working as project co-ordinator for the Lancashire Turns and Tunes project, exploring social dancing traditions across historic Lancashire, and is also leading a traditional music project for the Lancashire archives.

Stuart Graham is an Irish Bouzouki player and singer based in Leeds, West Yorkshire. At home accompanying an assortment of styles and genres, he’s become a go-to accompanist on the Leeds traditional scene. His most recent projects include work with Des Hurley of the Irish Arts Foundation, 'Exploring The Musical Traditions of County Leitrim & County Fermanagh'. Stuart’s regular outfits include Root & Branch and the Wanton String Band, both of which allow his versatility and style to shine.

This collaborative performance sees Kenney and Graham come together to perform traditional fiddle music from their historic home counties of Lancashire and Yorkshire.