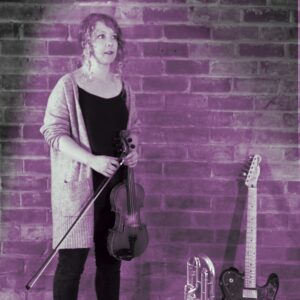 Nicola Beazley is a traditional fiddle player from the North of England and a recipient of the EFDSS Creative Seed Bursary 2018.

‘Echoes’ is Nicola’s debut E.P as part of her solo venture, which has toured to great success since its release in early 2019. Featuring an extended line up, Nicola’s music is an expression of English instrumental ‘folk’ in a forward-thinking performance, joining the dots between old and new, northern folk traditions and northern brass band traditions, through her explorative approach to folk and traditional music.

At Rochdale Folk Festival Nicola performs tunes from around the U.K in a stripped-back line-up with guitarist Andrew Watson.

‘The music really sparkles and glows, while also inviting a certain amount of judicious foot-tapping along the way.’ -FATEA 2019