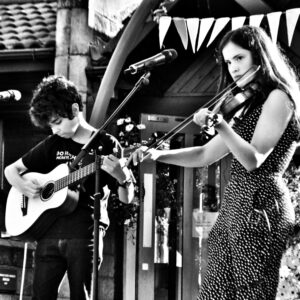 Orladh & Leo are a young award-winning musical duo based in the South Pennines with wide-ranging musical tastes across all genres.

The duo first met and grew to appreciate folk and traditional acoustic music styles as members of Little Folk, a junior group led by Cliff Woodworth at Rochdale Music Service.

Orladh plays violin/fiddle and Leo guitar and mandolin. It was when the two were practising prior to a Little Folk performance that a lightbulb moment occurred and the idea of them playing as a duo was formed.
In their short time as a duo, Orladh & Leo have won prizes at Rochdale Youth Festival of Performing Arts 2017 & 2018 (including a first place ‘special commendation’ from Calderdale Music Service Director Kevin Rivett). They were also invited to open the final night of Todmorden Folk Festival 2018 and have performed at the Curtain Theatre, Rochdale and numerous other events.

In January 2019, the pair won the Todmorden Folk Festival Youth Music Award and, as their prize, opened the main Saturday evening stage at the festival.