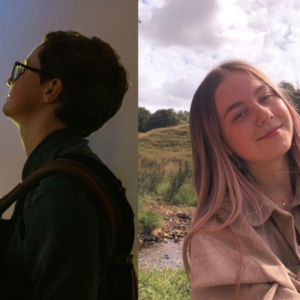 Robyn & Georgia play at The Baum on Saturday 5th June at 2pm.

Book at table at The Baum via THIS LINK

Robyn and Georgia met in 2013 at a folk workshop in their native Rochdale, and have since then had the pleasure of each other’s company several times a week, both playing with a local brass band, and dancing with a local folk arts group. Over the years, they have performed together many times, with their first “official” outing as a duo at Todmorden Folk Festival in 2017.

Since then, the duo have performed in a variety of ensembles, both together and apart, on a variety of instruments. Their repertoire draws on their backgrounds as musicians for traditional dance, drawing inspiration from artists such as Karine Polwart, Nicola Beazley and Andy Cutting.